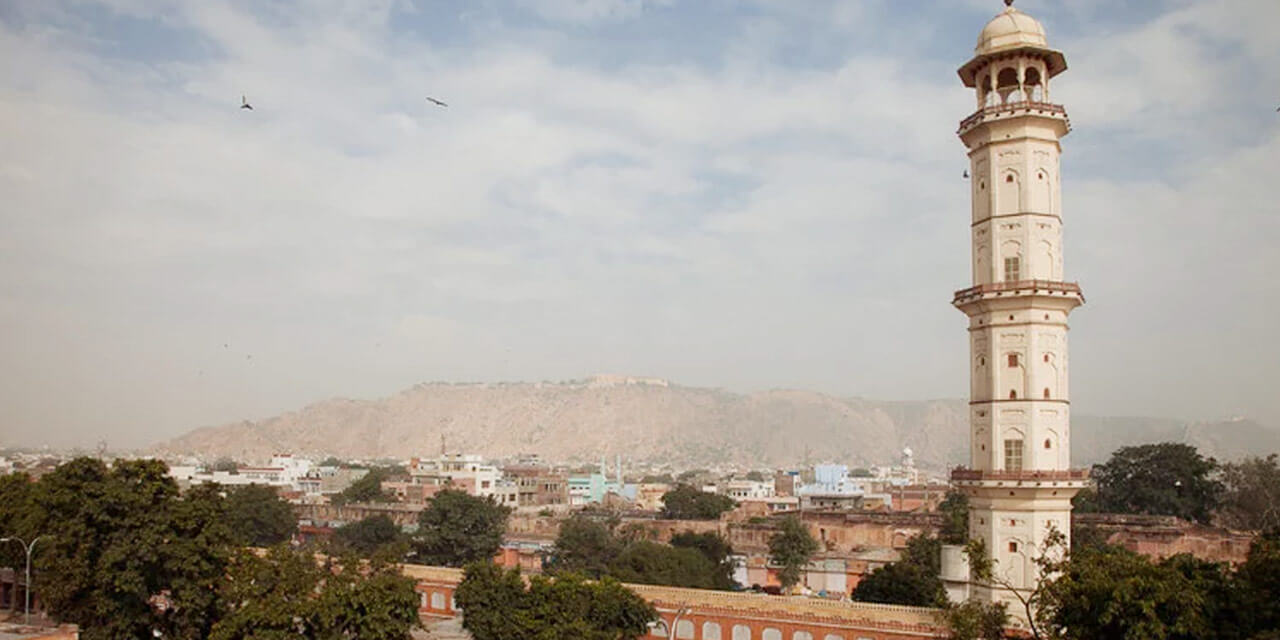 The majestic victory tower that stands erect in the middle of the pink city of Jaipur since 1749 called, Sargasuli Tower was built to celebrate the victory of Maharaja Sawai Ishwari Singh. He was the eldest son and heir apparent of the founder of Jaipur, Maharaja Sawai Jai Singh II.

The inspiration of the design for the Sargasuli tower was taken from the Qutub Minar and the Kirti Stambh of Chittorgarh since it is believed that Ishwari Singh was impressed by both the monuments for their respective designs and structure.

The Sargasuli tower is located in the Aatish market, which is at the intersection of Tripolia Bazar and Gangori Bazar, near Choti Chaupar Chowk and Tripolia Gate.

The SargaSuli or the Isar Lat as it is known alternatively, was built by Maharaja Sawai Ishwari Singh in 1749 as a commemoration of his Victory at the Battle of Rajmahal that was fought in 1747.

To know the history of SargaSuli, it’s important to know the story of rivalry between two step brothers fighting to rule Jaipur, Sawai Ishwari Singh who was the elder son and rightful legal heir, and his half- brother, Sawai Madho Singh, the younger son whom the Maharaja had written the throne to in a treaty that served as his permission to marry his second wife even before the two sons were born.

Maharaja Sawai Jai Singh II, the Kachwaha king of Amber, who was also the founder of Jaipur, had two queens. His first wife and the elder queen was Maharani Chandar Kanwar Ji and his second wife was Sisodia Princess of Mewar, the beloved to the King. Before he married the Sisodia Princess, Queen Chandra Kanwar made the Maharaja sign a treaty stating it would be her son who would succeed the throne of Jaipur even if he had sons from his second wife. The Maharaja agreed to do so.

However, as time passed by, the Maharaja deeply wanted his elder son, Ishwari Singh, from his second wife to accede to the throne after his passing. Little did he know that his youngest son, Sawai Madho Singh, the son from his first queen, would go on to revolt against this decision of his father.

After the death of the Maharaja, it was his elder son, Sawai Ishwari Singh who had succeeded the throne according to the traditions of the Kachwaha Dynasty. However, since the erstwhile Maharaja had already signed a treaty with his father- in- law, the Maharana of Mewar, the succession of Ishwari Singh did not quite go well with his younger half- brother, Madho Singh and his uncle, Maharana Jagat Singh, the then Maharana of Mewar. As per the treaty signed, Madho Singh was the rightful heir to the throne by law.

An attempt for peace

To avoid any battle between the brothers, Ishwari Singh and Madho Singh agreed to meet for a peaceful settlement in 1744. The treaty mentioned that Madho Singh would receive Tonk and Toda to rule on the conditions that he would not raise any revolts or rebellion against his brother. However, towards the end of the accord, there arose an internal discord between the Maratha mercenaries and Jagat Singh over non-payment of their dues. This led to an internal revolt where Marathas burnt supplies of Madho Singh and attacked him.

Taking advantage of the situation, Ishwari Singh reneged on the peace treaty and returned back to Jaipur leaving Madho Singh with no lands. Furious, Madho Singh returned back only to prepare on launching war against Jaipur.

The Battle of Rajmahal

To avenge his nephew and in pursuit of securing either the throne or a jagir in Jaipur for Madho Singh, Maharana Jagat Singh started building alliances with the Marathas under Khanderao Holkar as well as with the Hada clans of Bundi and Kota, led by Durjan Sal Rao of Kota and Umed Singh King of Bundi. This battle is called the Battle of Rajmahal since it was fought in Rajmahal, a current sub-divisional city in the Indian State of Jharkhand.

The armies of Madho Singh invaded Jaipur from South in March 1747 however, were faced by the forces of Ishwari Singh in Rajmahal which was led by his general, Narayandas. It is here that Madho Singh was defeated after 2 days’ war and was forced to flee into exile.

This Battle of Rajmahal was a disaster for Madho Singh but marked a major victory for Ishwari Singh.

To celebrate his victory in the Battle of Rajmahal, Ishwari Singh commissioned the construction of the tallest tower in Jaipur and named it Isar Lat. The tower became popular by the name SargaSuli which literally means ‘Passage to Heaven’.

The 140 feet victory tower of SargaSuli of Jaipur was commissioned by Maharaja Sawai Ishwari Singh and designed and constructed by Royal craftsman Ganesh Khowan. The tower is a seven storeyed octagonal structure built with a mix of Mughal and Rajput architectural styles put together and colored in yellow as a contrast to the pink color that dominates the buildings and market areas of the city. The minaret was built by following all the rules of Vastu shastra.

The small doorway leads to a flight of 264 steps thereby leading upwards, to the top of the tower. The circular stairway is designed in such a way that there is inlet of fresh air and light inside the tower due to the cross-section work done. The tower was later used as a watch tower. All seven storeys of the tower have a balcony outlet and are also lined with windows to get a look at the city below.

Due to its height and location, all the prominent landmarks and monuments of the pink city can be seen from Sargasuli Tower. One can locate the Nahargarh Fort, The Hawa Mahal, The Garh Ganesh, The City Palace, Jantar Mantar, The Royal Gaitore and The Charan Mandir from here very clearly.

1. City Palace: Visit the palace that still serves as the residence of the royal family of the Kachwaha Dynasty that once ruled Jaipur and had connections with the Mughals. Get around the huge palace complex with temples and museums and enrich yourself with the history of the Kachwaha Rajputs.

2. Jantar Mantar: The Jantar Mantar complex is a UNESCO World Heritage Site and houses the World’s largest stone sundial. Visit the complex to witness the astronomical instruments built by the chief architect of Jaipur, who was the king’s favourite.

3. Tripolia Bazar: Buy everything under the sun from the Tripolia bazar. The one mantra is to bargain hard and you take home a lot of Rajasthani traditional artefacts for yourself as well as friends and family.

4. Hawa Mahal: Built for the ladies of the royal court to watch the processions of the city without being seen. The Hawa Mahal is famous for its numerous tiny colorful windows also called ‘jharokhas’.

How to Reach Swargasuli Tower Jaipur

Due to its location in the heart of the city, the Sargasuli tower is easily accessible from all parts of the city by all means of transport.

One can rent a cab from top car rental companies in Jaipur or hire taxis, auto rickshaws, or e-rickshaws to reach here depending on the proximity of their stay to the tower.

Have a great time in the pink city by booking an all-inclusive Jaipur Tour package with us. We at Jaipur Tourism, a division of Holidays DNA ensure you have a memorable holiday experience while exploring the popular sightseeing places in Jaipur. To know more about our offerings, please fill the Contact Us form.