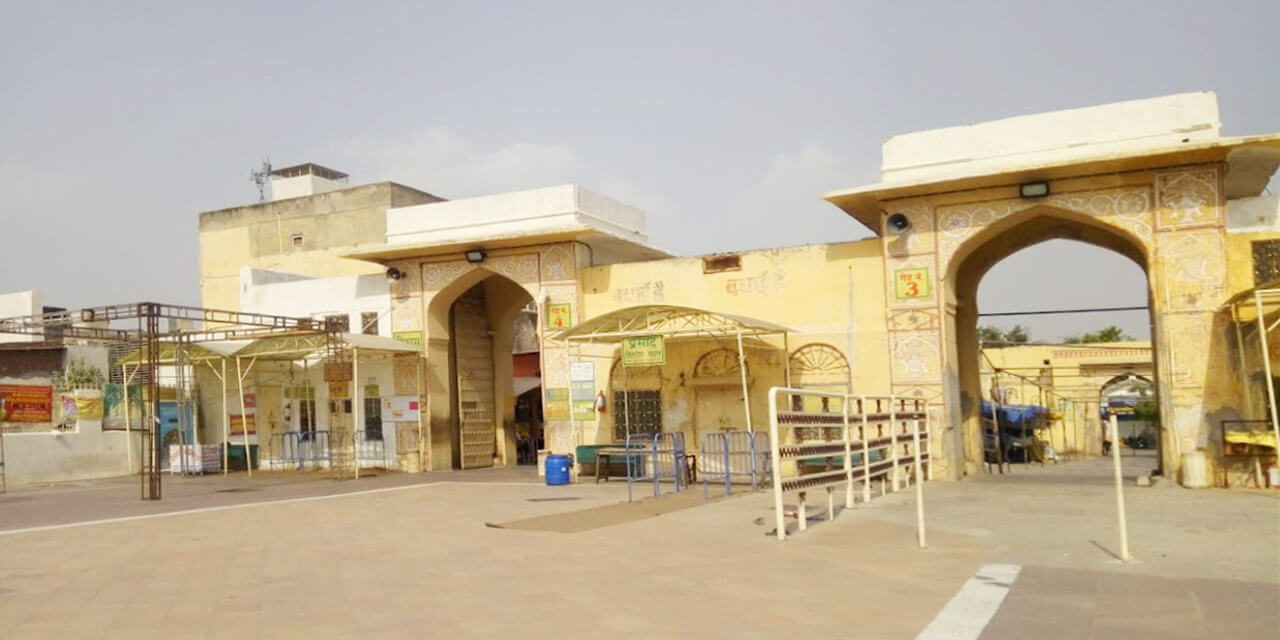 Govind Ji Temple is the most prominent and sacred place of worship in Jaipur, Rajasthan and also the most significant one as far as the history of Rajasthani rulers go. The temple is dedicated to Lord Govind Dev Ji, who is one of the forms of Lord Krishna’s incarnations on Earth and is considered as the principal deity of the Kachwaha Dynasty of rulers of Amber/Amer.

It is believed that the idol of Govind Ji looks exactly like Lord Krishna did. The Maharaja of Jaipur, Maharaja Sawai Jai Singh was a devotee of the Lord and hence, had his palace designed as such that he could get a glimpse of the Lord directly from his palace, after the idol was shifted from Amer to Jaipur.

Due to its significance and legend, the temple is thronged by devotees all year round and gets a huge footfall.

Lord Govind Dev Ji, one of the forms of Lord Krishna, is the main deity of the Kachwaha Dynasty of Amber and is associated with the rich history of Jaipur and its rulers.

It is said that the original Govind Dev Ji idol was in a temple in Vrindavan, which was excavated around 450 years ago from Goma Teela in Vrindavan by a disciple of Shri Chaitanya Mahaprabhu, Srila Rupa Goswami.

Coming to know about the existence of the temple, the then Maharaja of Amer, Sawai Man Singh along with the Mughal Emperor Akbar, built a huge temple in Vrindavan in 1590 A. D. The red sandstone used to build the temple was donated by Akbar which was intended to be used to build the Agra Fort. Additionally, the emperor also gave away around 135 acres of land for livestock and feed.

During the 17th century, the Mughal ruler Aurangzeb was on a spree razing off Hindu temples and destroying the idols. Around the same time, the idol of Govind Ji was taken care of by Shri Shiv Ram Goswami in Vrindavan. In pursuit of saving the idols, he kept transferring the idols from Vrindavan to Kama in Bharatpur to Radhakund to Govindpura in Sanganer.

Since Lord Govind Dev Ji was the principal deity of the ruling dynasty, the then ruler of Amer, Maharaja Sawai Jai Singh took onus of providing protection to the idol and placed it in Amer Valley which was later named as Kanak Vrindavan in 1714 AD. However, they could not place it out in open the reason being, Amer served the Mughal court during that time and could not afford to have a stand- off with the Mughals.

The idol of Govind Ji was first brought from Amer to Jaipur and placed at the Surya Mahal in 1735 AD, by Maharaja Sawai Jai Singh after he received instructions in his dreams from the Lord himself to do so. The Maharaja enshrined the deity at Suraj Mahal as he thought the palace belonged to Lord Govind Ji and he himself moved his residence to a new palace and named it Chandra Mahal. The Chandra Mahal was built in such a fashion that the idol of Govind Ji would be at his direct sight from the palace.

The Suraj Mahal was later renamed and is known by its present name, Govind Ji Temple.

Legend behind the idol at Govind Dev Ji Temple Jaipur

Legend has it that around over 5500 years ago, the great grandson of Lord Shri Krishna, the 13 years old Bajranabh wanted to make the exact idol of the Lord after getting appropriate instructions from his grand- mother about the Lord’s original looks.

It was the third idol made by Bajranabh that looked exactly like Lord Shri Krishna in all manners and was approved by his grand- mother. This final idol came to be known as Lord ‘Govind Ji’. The idol of Govind Ji is also called ‘Bajrakrit’ which means ‘created by Bajranabh’.

The Govind Ji Temple is built in sandstone and marble with ceilings covered with gold. The architecture of the temple building has a mix of Rajasthani, Muslim as well as Classical Indian elements to it. Since it was built beside a royal residence, the walls are adorned with chandeliers as well as paintings. The temple is also surrounded by a lush green garden and the garden is known by the name, ‘Talkatora’ and is best suited for children.

Aarti and ritual timings: The aarti timings differ by half an hour to 45 minutes with seasons, summers and winters. During summers, the morning Mangla aarti begins at 4:30 AM, followed by the Dhoop and Shringar aartis at 7:30 AM and 9:30 AM respectively.

The food offering to the deities is done just before noon at 11:00 AM which lasts till 11:30 AM and is called the ‘Rajabhog’.

The evening aartis begin with the early evening Gwal aarti at 5:45 PM, followed by the Sandhya aarti at 6:45 PM which is late evening aarti and night aarti starts at 9:00 PM, which is called the Shayan aarti.

Entry Fee: There is no entry fee to visit the temple.

Best Time To Visit Govind Ji Temple Jaipur: The temple can be visited all year round however, the Janmashtami celebrations are done with great pomp and show here and one must most certainly visit the Govind Ji Temple during Janmashtami. The deities are dressed in jewels and charming clothing.

Holi is another major festival to look out for to visit the Govind Ji Temple.

As a matter of fact, the Satsang hall of Govind Ji Temple of Jaipur found its place in the Guinness Book of World Records for being World’s widest single span R.C.C flat roof construction. The span measured 118 feet and took 383 days for the construction to be completed with 290 tons of steel and 2000 cubic metres of concrete used.

The idol of Govind Ji is taken out for procession during each aarti as well as during the ‘Rajbhog’. The bhog or food is offered to the deity in silver ware. Sweets are included in abundance in the Rajbhog. Both Radha and Krishna idols are dressed in different costumes during each aarti.

The holy prasad of the temple is the humble laddoo, and visitors can purchase the prasad from the temple complex itself.

The daily footfall of devotees at the Govind Ji Temple is around thousands in numbers and goes up to lakhs during festivities.

2. City Palace: The current residence of the Royals of Jaipur, one might get a glimpse of how the royals live during their tour of the City Palace. This used to be the seat of the Maharaja of Amer after he shifted his capital from Amer to Jaipur and built the Pink City. Every visitor takes back rich history as a package after their visit to the City Palace.

3. Jantar Mantar: Built by the founder of Jaipur, Maharaja Sawai Jai Singh, the huge architectural astronomical structures are a part of UNESCO World Heritage sites. The observatory instruments operate according to three classical celestial systems and is a charm to watch with the naked eye. A visit here is highly recommended and not to be missed.

4. Hawa Mahal: As the name suggests, Hawa Mahal literally translates into ‘palace of winds’. The red and pink sandstone structure is the best example of Rajasthani architectural marvel that leaves every visitor in awe. Experience the view of the entire pink city from tiny colourful windows of the palace, called ‘Jharokhas’ in local language, at a mere fee of INR 50.

5. Tripolia Bazar: Get to the streets of the oldest and the busiest market of Jaipur which is named after one of the gates of the City Palace. Fulfil your wish to own custom-made lac bangles, artefacts, silver ware, iron ware and brass wares at steal prices. Shopping at Tripolia would hone your bargaining skills. This market will fulfil your wish of ‘shop till you drop’.

The Govind Ji Temple in Jaipur is located near Jaleb Chowk, inside the City Palace complex.

Since the Govind Ji temple is located inside the City Palace premises, it is very easily accessible from all parts of the city by all means and modes of transport. One may book cabs or auto- rickshaw or a cycle rickshaw. One may also reach the city palace by Rajasthan city bus.For a more comfortable ride, you can also hire a private cab from top car rental companies in Jaipur and visit all the popular sightseeing places of Jaipur in a hassle free manner.

Nearest Bus station to reach Govind Ji Temple: Sindhi Camp Bus Stop. One may get down here and hire a cycle rickshaw, auto rickshaw or an e-rickshaw to the palace.

Enjoy your Jaipur Tour by booking an all-inclusive Jaipur tour package with us. At Jaipur Tourism, a division of Holidays DNA, we have designed the tour packages keeping everyone’s holiday duration and style in mind. To know more about our offerings, please fill in the Contact Us form.