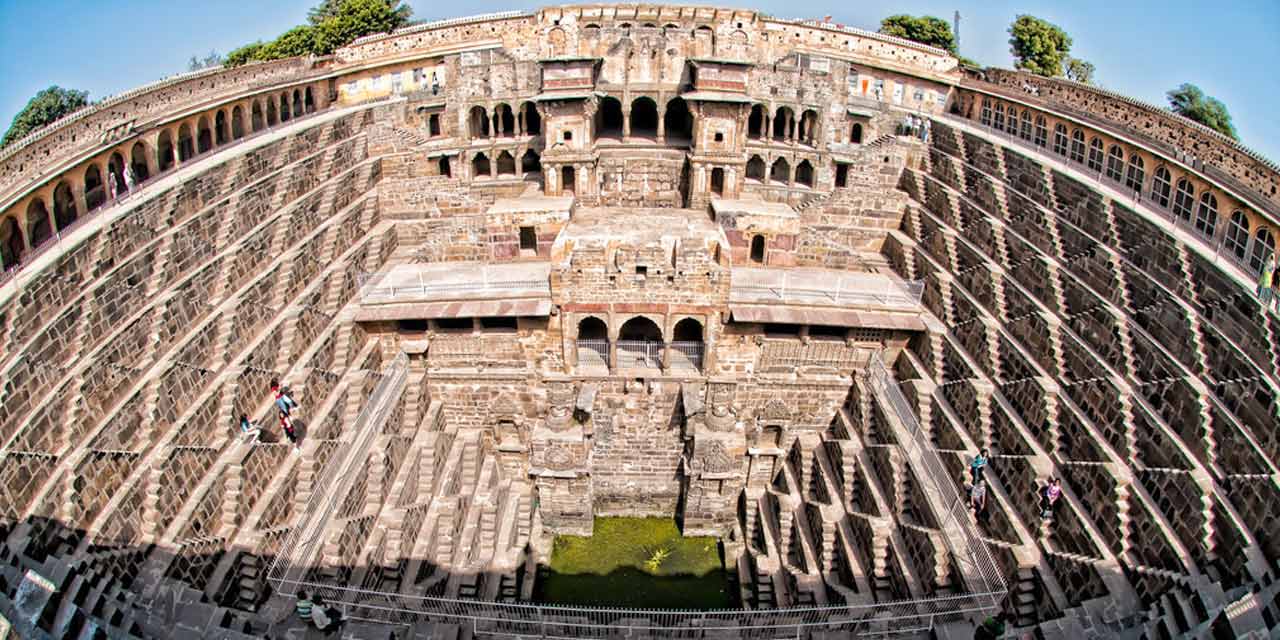 India and its ancient architectural marvels have always been drawn in parallels and one of the most amazing and intriguing architectural marvels are the stepwells of Northern India. In the Indian state of Rajasthan lies Chand Baori or Stepwells of Abhaneri, as it is famously known, which is among the largest step wells in the world. The principal idea behind building step wells was to conserve rain water in the desert lands and additionally, they served as natural coolers during the summer months, which were unbearably hot.

When one is around Jaipur, a visit to Abhaneri step well is most recommended. The Abhaneri step wells are so famous that they are visited by locals, domestic tourists as well as international travellers in equal measure. The thirteen storey step well boasts of its exquisite geometry and intricate architecture of the huge pavilion with windows, galleries and balconies.

One look from top of the baori towards the bottom, the glistening green water stands out in contrast to the stone stairways making it a sight to behold. When the sun is high, the play of light and shadows due to the maze work of the steps gives a photographer some best angles and photo opportunities. Due to its amazing architecture and the geometric work of the entire structure, the Chand Baori is every photographer’s delight.

Chand Baori has also served as the location for shooting several movies; the famous ones include Bhool Bhulaiya, Bhoomi, The Fall, The Best Exotic Marigold Hotel and The Dark Knight Rises starring Christian Bale as Batman.

The Chand Baori is managed by the Archeological Survey Of India.

The history of Chand Baori even predates the Taj Mahal, The Chola Temples as well as The Khajuraho Temples. The step well was built around 8th or 9th Century CE by King Chand Raja, who belonged to the Pratihara dynasty of the Gurjara- Pratihara clan, which makes the baori around 1200 to 1300 years old. This makes the Chand Baori one of the oldest step wells of the world in literal sense. The King always claimed to have been the descendant of Lakshman, the younger brother of Lord Rama of Ayodhya.

The city, which is called Abhaneri at present, was known as Abha Nagari back then and the step well was named after the King Chand Raja himself.

The Archaeological survey evidence point out that the high pavilions, upper arcade and the art galleries were added during the 18th Century when Mughal rule was in prominence. It is not known as to who exactly added them however, the designs of the compound walls depict works that could have been the works of the Mughals.

The king also built a temple adjacent to the step well and it was dedicated to Goddess Harshat Mata, the Goddess of joy and happiness. The temple is located towards the west of the Chand Baori at a distance of 100 metres. The temple was ravaged by Muhammad Gazni when he invaded India during the 10th Century and is in ruins till date.

The damaged pillars and statues of the temples still lie scattered around the main temple complex and its corridors. The central structure of the temple is a domed structure at present, with stone sculpted columns and pillars.

The original structure of the structure that appears as the central dome- roof is said to have been a shikhara tower, typical of any Hindu temple. The original temple is believed to have been built in the panchayatana style where the central shrine is surrounded by four other shrines. All the shrines are in ruins today with very little of the original structures left. The temple is taken care of by the Archeological Survey of India.

Being very old, there are numerous legends and folks associated with the Abhaneri step well. As the folklore goes, the entire step well was built in just one night and thus, was the work by not any human, but some superhuman forces namely the djinns. By the looks and the massiveness of the structure, it somehow seems an unimaginable feat though. However, it is the absence of any epigraphic evidence with respect to the construction of the Chand Baori, that the ancient lores are strongly believed by the locals.

As per other facts and legends, it is said that one person has never been able to use the same set of stairs to go down as well as climb back up. Also, no one has ever been able to step on the same stairs twice even if they tried.

The architectural masterpiece that it is, Chand Baori is a four- sided structure with the famed 19.5 metres deep geometric steps of the step well covering the Baori from three sides and the fourth side is covered by the prominent corridor building with multi-storeyed pavilions.

The pavilion houses a grand room with a separate stage that is believed to have been meant for the royals to enjoy performances by artists of the court. There is also a room that appears to be the royal residence. There are galleries that take visitors towards the balconies projecting out, that are supported by pillars and house beautiful sculptures of Goddess Mahishasurmardini and Lord Ganesha.

The major attraction of the baori is the incredibly designed double flight geometric steps descending into the water body. There are 3,500 steps built in 13 levels that finally lead to the well and tapers down as one reaches to the bottom, nearer to the water.

It should be noted that the entire structure is built out of porous volcanic rocks and stones. This enables the water to seep through the stones and reach to the bottom of the water pool or the well. As one climbs down towards the end of the steps, the temperature surrounding the area drops by almost 5- 6 degrees as compared to the temperature on top of the baori.

The triangular pattern of the steps makes one climb down sideways and this adds to the aesthetics of the architecture. The other possible reason to build the steps in such fashion is to allow access to more people at one time. A closer look at the bottom of the steps would reveal the presence of concealed shafts that were supposedly used to pull water out from the pool.

The entry timings to Chand Baori Abhaneri are between 8:00 AM to 6:00 PM. There is no entry fee.

The Rajasthan Tourism Department started the two- day Abhaneri Festival since 2008 which is held in October every year. The annual festival has gained quite a momentum in the past couple of years. The festival is held in the nearby village of Dausa and is visited by tourists from all over the world.

The locals engage in a variety of Rajasthani folk performances like Ghoomar, Kalbeliya, Kachhi Ghodi, Langa, Raas leela and Bhawai. There are puppet shows and art & craft exhibitions held during the festival.

Harshat Mata Temple can be visited along with Chand Baori.

How to Reach Chand Baori Abhaneri

As Chand Baori is situated in Abhaneri village which is 95 kilometres from the city of Jaipur, the easiest way to reach is to hire a taxi or rent a cab from top car rental companies in Jaipur. There are no direct buses that go towards Abhaneri from Jaipur.

If someone is on a budget trip and wishes to reach the stepwell via public transport, the journey can be broken down into two folds. First, from Jaipur to Sikandra and from Sikandra to Abhaneri one may rent a jeep or cab, whichever is available.

Have a great time at Jaipur by booking a Jaipur Tour package with us. We at Jaipur Tourism, a division of Holidays DNA have designed the packages as per the requirements of our clients that include a tour of popular sightseeing places of Jaipur. You can choose the package according to your duration of stay and budget. For further details, please fill the Contact Us form and we will get back to you.