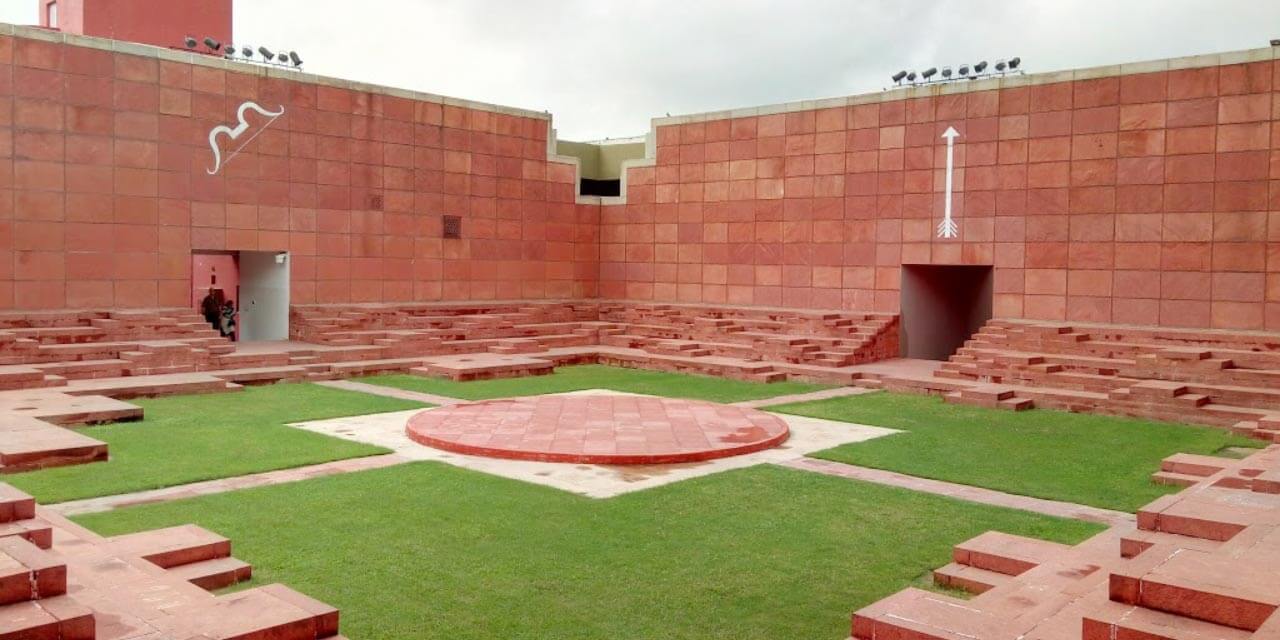 Located in the heart of the city of Jaipur, the Jawahar Kala Kendra was dedicated to the first Prime Minister of independent India, Pandit Jawahar Lal Nehru. The importance of the arts and crafts centre is associated with the nomenclature of the city of Jaipur itself as the design of the centre resonates with that of the city itself.

The Jawahar Kala Kendra was opened to encourage the promotion of Rajasthani cultural and traditional values and also to showcase India’s rich heritage, arts and crafts. It is commonly referred to as JKK in short by the locals.

The Jawahar Kala Kendra is located opposite the commerce college on 2 Jawahar Lal Nehru Marg at Jhalana Doongri in Jaipur.

The Jawahar Kala Kendra was designed and built by the late architect from MIT, Charles Correa in 1986. The construction of the building was completed in 1991 and is built according to the concept of ‘Navagraha’ (nine planets or nine squares) or commonly called the nine-house mandala.

The construction of the centre was commissioned by the Rajasthan Government and was opened to the art and cultural enthusiasts in 1993.

As time progressed, the upkeep of JKK went for a toss and the complex started being ignored. The only time when people would gather here would be during functions arranged by government officials or a traditional fair or mela. Around 2015, the then Chief Minister of Rajasthan advised that the Jawahar Kala Kendra be once again refurbished for art and cultural events and exhibitions in an initiative to promote tourism and culture.

The renovations saw modern additions to the Kala Kendra with air conditioners and humidifiers installed in the galleries of museum and library with ramps for wheelchair users.

The entire complex is built in red sandstone and white marble with vastu symbols on the façade of each square structure.

Since the quality of planet Jupiter is ‘knowledge’, and the library is a place where knowledge is either imparted or gained. Hence, the functionality of the building built under the position of the planet was dedicated to be a library with an additional water body outside the building to make the building appear livelier.

The roof is partially exposed to sun wherein the beams are joined by bamboo giving it an aesthetic feel. The library building is also called ‘Sandarbh’. The library boasts of having a collection of more than 14,000 books.

The cafeteria is linked to the moon or the lunar mandala.

The central dome over the entrance plaza of the Jawahar Kala Kendra has murals and paintings representing Jain mythology on the ceiling. However, most of the paintings depict more of cosmology and astronomy and few other paying tributes to the central theme of the building, art.

There is a rural complex setting adjacent to the Jawahar Kala Kendra complex that showcases rural set up of various other regions of Rajasthan namely, Shekhawati, Braj, Marwar, Hadoti, Tribal and Desert land. This complex is called Shilpgram and it hosts the annual folk art festival called ‘Lokrang’.

The Jawahar Kala Kendra houses 3 theatres, one open and 2 closed. The Open theatre is more famous among the visitors and can accommodate 400 people at one time. The open theatre is located at the centre of the premises. Due to the location and its openness, young artists prefer to rehearse their plays here.

The other two theatres of JKK are called ‘Rangayan’ and ‘Krishnayan’. Rangayan hosts modern plays whereas Krishnayan hosts more intimate plays, particularly focussed on distinct subjects and issues of the society.

The Jawahar Kala Kendra hosts the famous multi-disciplinary performance arts festival, ‘Navras’. This festival is a week-long festival wherein visitors get to participate in the architecture walk of the Kala Kendra as the guide takes them for a tour of the complex.

In addition to the architecture walk, the other performances include theatre plays, music and traditional dance performances.

Another annual festival on country-folk art and culture is ‘Lokrang’. It is a 10- day festival usually held during October or November. There are several workshops, exhibitions, events as well as performances organized during this festival. The performances are done by folk- artists from all over the country.

The coffee house within the premises of the Jawahar Kala Kendra is a famous hang out place. They brew excellent coffee along with snacks like sandwiches, fritters and samosas. Additionally, the café also offers South Indian dishes like idlis, dosas and uttapams.

The cafeteria is famous among the artists and visitors alike.

‘Madhuban’ is another restaurant inside the premises that doles out some of the sumptuous food. This restaurant runs on a dhaba model.

The Jawahar Kala Kendra is open all days of the week from 10:00 AM to 9:00 PM. There is no entry fee charged to visit the place.

1. Jaipur Zoo: The largest zoo in Jaipur with around 71 species of animals and birds is a must visit for anyone traveling to Jaipur. You may come back impressed by the gharial breeding farm which is the fourth largest in the country.

2. Ram Niwas garden: Apart from being home to Jaipur’s largest zoo, the Ram Niwas Garden is also home to several exotic plants. The garden is a must visit and if you are a photography or botany enthusiast, this place is not to be missed at any cost.

3. Albert Hall Museum: The central museum and the oldest in the state, the Albert Hall is at a stone’s throw distance from Ram Niwas Garden and one must visit the place due to the rich history that one gets to witness.

As Jaipur city is connected very well with all nearby as well as prominent cities through all means of transport, it is quite easy to reach Jawahar Kala Kendra by using any mode of transport.

The Jawahar Kala Kendra is a famous landmark in itself and it makes it easier to reach the destination via road, rail as well as air transport.

One may hire a cab from top car rental companies in Jaipur to reach Jawahar Kala Kendra from the railway station or airport.

Make your trip to the pink city a memorable experience by booking a Jaipur Tour package with us. Jaipur Tourism, a division of Holidays DNA offers a wide variety of packages at cost effective prices to help you visit all the famous tourist attractions of Jaipur in a hassle free manner. Please fill the Contact Us form and we will help you choose the package that suits you best based on your preferences and budget.