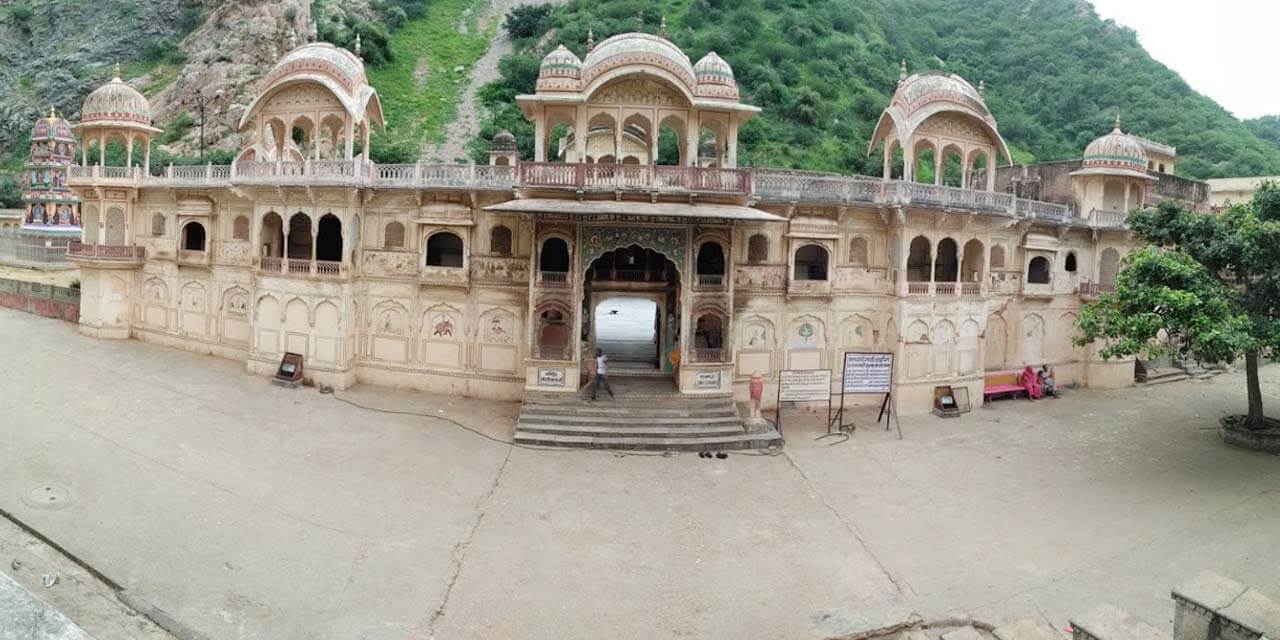 Regarded as a highly sacred pilgrimage with great historical significance, the Galta Ji Temple lies 10 kilometres to the east of Jaipur city. The temple complex is basically a cluster of several temples, Galta Ji being the main temple. The temples are built within a narrow crevice of a mountain pass in the Aravalli hills.

The temple complex has several sacred tanks that are locally called Kunds and are used by pilgrims for bathing and thereby washing away their sins. The kunds are filled by the means of a natural spring that emerges high on the hills and makes its way downward, filling all seven sacred kunds. The Galta Kund is considered to be the holiest of all kunds here, and also holds great significance as it is believed to have never dried up till date.

There is a huge population of monkeys at Galta Ji due to which, the temple is also called ‘The Monkey Temple’ or ‘Galwar Bagh’. The rhesus macaque and langur monkeys are the monkey species found at Galta Ji. The monkeys here are infamous for mobbing and robbing visitors of their belongings as well as food. They are notorious to the point that if they see anyone carrying any sort of food, they simply snatch it away. It becomes imperative to carry all belongings in a bag and not snack on anything out in the open.

The highest number of footfalls at Galta Ji Temple is experienced during the festival of Makar Sankranti and Kartik Poornima, wherein, thousands of devotees take a dip in the sacred kunds. The sounds of chants and religious hymns make the environment more pleasant. And, due to the fact that the temple is located completely off the tourist patch also makes it more peaceful. Most of the visitors here are locals. It is also most fascinating of the views when pilgrims get to see the monkeys taking a dip in the kunds.

There is a hiking trail to Galta Ji from western tip of Jaipur city which starts from the end of Suraj Pol Bazar Road. The entire hike can be completed in 30- 45 minutes. The route that starts from the Bazar runs towards east through a large stone archway coloured in pink. The views of the city of Jaipur are most certainly the best views one can have from the pink stone archway route. One has to also pass by the Sun Temple when hiking to Galta Ji Temple.

The vantage point of the Sun Temple offers mesmerizing views of the sunset. If not hiking to Galta Ji, one can also ascend from the temple end via the crevice, passing the highest sacred tank, and then to the Sun Temple to watch the sunset. One can also see the detailed fortification of the entire Jaipur from this point.

Galwar Bagh Gate and Others

The Galwar Bagh Gate is the main gate at the entrance of the Galta Ji Temple. The prominent gate is a huge structure in pink that houses all temples inside the complex. The other impressive structures or temples to watch out for, inside the complex are the Brahma Temple, The Vishnu Temple and the Galta Kund. They are all must visit.

The Governing Office of Galta Ji

Apart from being a temple, the Galta Ji is also considered as a holy Ashram which is also the Governing office.

The Galta Ji Temple was built by Diwan Rao Kriparam, who was an attendant at the court of Maharaja Sawai Jai Singh II. The temple complex was built in the 18th Century. Even before the temple was built, the place still used to be of utmost importance to the Vaishavites Ramanandis.

Many historians have added to the history of Galta Ji stating that way before the 16th Century, many yogis and sadhus (saints) lived here at the site where Galta Ji Temple stands today. The yogis and saints were driven away by the mystical and spiritual powers of a Ramanandi Sadhu by the name Krishnadas Payo Hari.

It is said that the Ramanandi Sadhu lived only on a ‘milk only diet’ and was called ‘Payo Bhaksha’ due to which, the word ‘Payo’ was added to his name. As time went by, the site became a centre of significant importance for both Ramanandi Hindus and Naga Sadhus. They are also believed to have taken part in many wars.

About the Ramanandis: In medieval India, Saint Ramananda was a follower of the Ramanujacharya sect of Vaishnavism (Hinduism). The Ramnandis consider themselves to be the descendants of Luv and Kush, the sons of Lord Rama.

When it comes to composing history and poems, Guru Nabha Dass Ji had composed his famously disputed poem ‘Bhaktamal’ while he was living at Galta Ji. The composition of the poem is largely based on the account of Bhaktas across sectarian paths and hence, is considered important source for the history of Northern India. It is a part of the literary and devotional history of North India.

Another important historical aspect of Galta Ji is that the founding philosophy of the ‘International ISKCON Movement’ started by Swami Prabhupada, was borrowed from ‘Govind Bhashya’ written by Swami Baldeo Vidyabhusan in Galta Ji. The Govind Bhashya is a commentary on Vedanta Sutra and was written in 1718 AD.

Additionally, the most secular Mughal Emperor, Akbar had also visited Galta Ji to seek blessings thereby donating 2592 bighas of land to the head of Galta Ji soon after his wishes were answered. This grant is a historical document that is still preserved at Galta Peeth.

Apart from these, another interesting historical fact is that there were many small temples built around the hills that surround the Galta Ji Temple even before the Galta Ji temples were built. These temples today are in ruins but one can still sense the opulence even in their ruins.

The Galta Temples were submerged in water during the floods in Jaipur in 1981. However, the swift restoration work got the temples back to their glory very soon.

The Galva Ashram is named after the famous sage, the Holy Saint Galav to pay tribute to the Saint’s devotion.

The history and legend of Galta Ji Temple goes back to the prehistoric ages of the Satyuga, and is related to Saint Galav, who lived at this site, spent thousands of years doing penance through meditation, seeking the truth. It is believed that, pleased by the meditation of Saint Galav, the Gods appeared before him and blessed the place with abundance of water by getting Ganga here at Galta Ji right from Gau- mukh (The Cow’s Mouth).

If the old legends are to be believed, the holy script of ‘Galvashram Mahatmaya’ states that during the Hindu month of ‘Kartik’, on a full moon day, which is also called as ‘Kartik Poornima’, the holy trinity, Brahma, Vishnu and Mahesh (Lord Shiva) visit Galta Ji. Hence, taking a dip in the Galta Kund on this day provides the visitor with multi-fold blessings.

In an yet another belief, it is said that when completing the religious Hindu pilgrimage of the ‘Char Dham’ (Four sacred places) and ‘SaptPuris’ one needs to come to Galta Ji and take a holy dip in the sacred Galta Kund without which, the pilgrimage is said to remain incomplete.

It is also believed that the acclaimed Indian poet, Tulsidas had composed several sections of ‘Sundar Kand’ of Holy Ramcharitmanas here at Galta Ji. He devoted 3 years spending his time at Galta Ji and writing the Holy book.

The system of appointing Acharyas is followed by the Galta Peeth. Their first Acharya was Payo Hari and is currently headed by its 17th Acharya, Shri Sampatkumaracharya (Avadheshacharya) Ji.

Earlier, each of the Acharyas practiced celibacy and never married. However, when the peeth was at its eighth Acharya, the Maharaja of Jaipur, Maharaja Sawai Jai Singh II insisted on the Acharya to get married since he was to conduct the ‘Ashwamedha Yagna’ which, ideally was incomplete unless the Guru sitting for the yagna sat along with his wife. This would lead the yagna performed by the ruler to be unsuccessful. Ever since then, all Acharyas have been married.

The architecture of the Galta Ji is typical to a mix of Indian classical and Rajasthani elements as there are beautiful frescoes to Indian mythology paintings along with the canopies or the curvilinear chhatris adorning the roofs of the temples. The windows are designed in typical Rajasthani architecture.

The entire temple is built of pink sandstone having pavilions with intricately carved pillars and painted ceilings and walls. The paintings on the ceilings and walls of the temples mostly depict stories from Hinduism and Indian mythology.

The Hanuman temple in the complex is famous for its ‘Akahnd Jyoti’ (the eternal lamp), the flame of which has been burning for centuries, since the time the Hanuman idol was consecrated. Many people find this belief a little out of the horizon of belief but there are people who still believe in such legends.

The Shri Gyan Gopal Ji Temple compound houses a school for students and disciples. There is a pretty idol of Lord Krishna inside the Gyan Gopal ji Temple. There are several small temples inside the Galta Ji complex that stretch from the Galta Gate to Shri Sitaram Ji Temple.

Entry is free for all irrespective of nationality or faith.

1. Krishna Temple: Since it is a prominent location for the vaishnavite community, the Krishna Temple in the Galta Ji Temple Complex is a must visit. The faith here, goes on similar lines of ISKCON teachings. The temple is also called Shri Gyan Gopal ji temple.

2. Surya Temple: Located on top of the rocky patch on the highest point of the Galta Ji Temple Complex, this temple site is a lesser known and least visited one. Visit the temple for its serene atmosphere and the best views of sunsets from the top.

3. Balaji Temple: More of a shrine, the Balaji Temple inside the Galta Ji Temple Complex is in the same alley as the Krishna and Ram Temple. The shrine gives a sense of peace and leaves a visitor in awe.

4. Sitaram Ji Temple: Dedicated to Lord Ram, this temple is surrounded by monkeys and no visitor can avoid their presence. The Sitaram Ji temple complex also has few shrines on the outside as well as a small Hanuman temple.

The Galta Ji Temple is located in the town of Khaina- Balaji on the outskirts of Jaipur around 10 kilometres away from the city, towards east of Jaipur.

How to Reach Galtaji Temple Jaipur

Due to its location outside of the city, it is better to go by road from the city. One may rent cabs (Ola, Uber, etc.) or hire taxi or auto- rickshaw or e-rickshaw to reach the temple.

If someone intends to travel by bus, there are options for both state- run buses as well as deluxe buses.

One may also opt for a private cab from top car rental companies in Jaipur and reach the temple in a comfortable manner.

Nearest Railway Station: The nearest railway station to Galta Ji Temple is Bais Godam Railway Station. The temple is located one kilometre from the station.

Nearest Airport: Jaipur International Airport is the nearest airport to Galta Ji Temple. One may hire a cab from airport to reach the temple.

To help you plan your Jaipur Tour in the best possible manner we at Jaipur Tourism, a division of Holidays DNA offer Jaipur Tour packages at pocket friendly prices. The package includes a tour of all popular places to visit in Jaipur in a private cab. Please fill the Contact Us form to know more about our packages and existing deals.