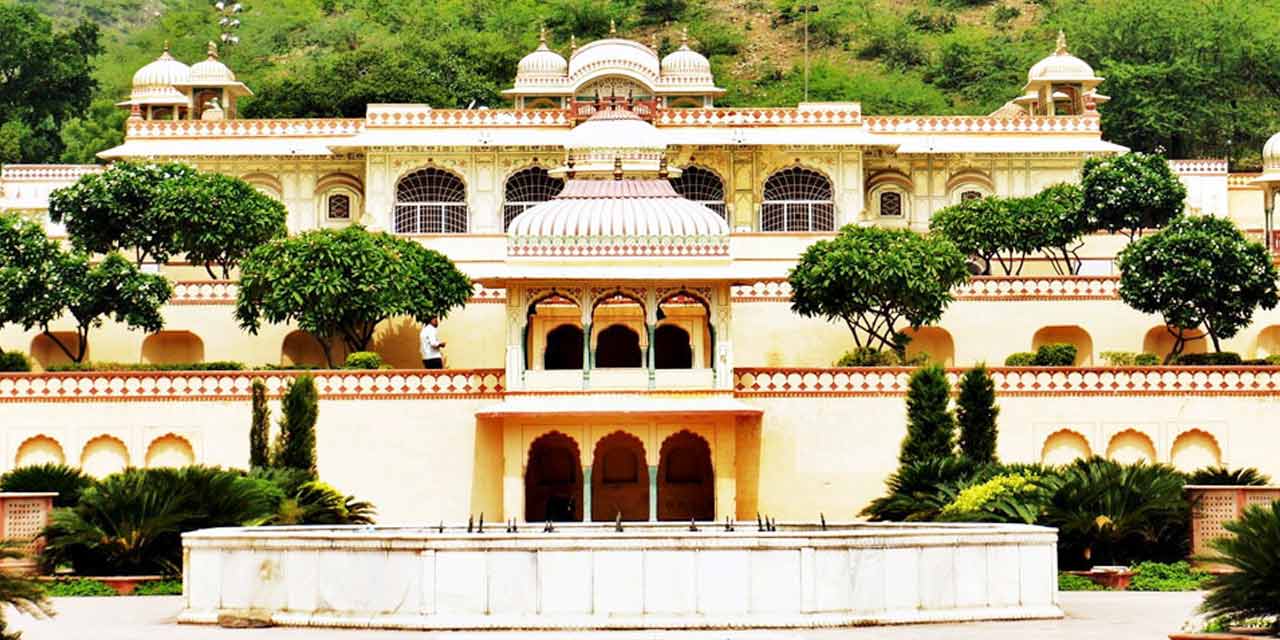 Want a piece of Mughal gardens in the pink city of Jaipur? The Sisodia Rani Ka Bagh is your place to be. 10 kilometres from Jaipur, on the Jaipur- Agra highway, Maharaja Sawai Jai built the palace garden as a gift of love for his second queen. The heritage garden is the largest, most interesting and impressive of all the gardens in Jaipur.

Apart from the lush green trees and floral beds, the beautiful Charbagh styled garden is famous for its multi- layered palace, pavilions, shrines, murals, frescoes, scenic, paintings, and fountains. The garden is equally famous among tourists and locals.

There are peacocks prowling around the garden quite frequently. The garden has also been a destination for many movie shootings, the most notable of all being the famous movie ‘Lamhe’ that starred Anil Kapoor and Sri Devi.

It is the best place for photography, history and nature enthusiasts.

The Maharaja of Jaipur had special affection towards his second wife, the Princess of Udaipur and built a special garden as a retreat for his beloved queen. The princess belonged to the Sisodia Rajput clan of Udaipur who are believed to be descendants of the Surya Dynasty and hence, called Suryavanshis.

The Maharaja built the garden in 1728 and gifted it to his beloved wife for her to get away from the humdrums of the royal court politics and intrigues.

For those who are unaware of the Charbagh garden style, this was introduced by the Mughals (specifically Babur) after they invaded India. The Charbagh is a native Persian style of quadrilateral or four- part garden divided by walking paths, sometimes lined by water beds that intersect at central point. The principle of the quadrilateral garden design is taken from mentions in the Qur’an where Charbagh is intercepted as gardens of Paradise.

The Mughals and the Kachwaha rulers of Amber had great political association as well as family relationships as one of the Kachwaha princesses was married to the Mughal emperor Akbar. The Kachwahas also fought many wars alongside the Mughals leading the armies. This is one of the reasons for most of the architecture of Amber and Jaipur having Mughal influence.

The spires and pavilions of the Sisodia Rani ka Bagh are frescoed with Hindu motifs and paintings from the life of Krishna and are built in Indian architecture. The Queen’s palace is placed in such a way that it overlooks the entire garden. The murals on the walls of the palace are majorly based on the love stories and legends from the lives of Lord Krishna and his most beloved Radha. In addition to the murals of Radha and Krishna, the palace walls also have murals and paintings of hunting scenes.

Another aspect of the well- planned architecture is that none of the staircases of the building are visible and appear concealed.

There is a central shrine dedicated to the Hindu Gods like Lord Shiva, Lord Hanuman and Lord Vishnu. There is also a natural spring located beside the central shrine.

The entry fee is INR 50 for Indian nationals and INR 200 for foreign nationals.

Best Time To Visit Sisodia Rani Ka Bagh Jaipur: The best time to visit the gardens would be between Monsoon and Winter months as that is the best time when flowers are in full bloom. Hence, July to March would be the best time.

1. Galta Ji Temple: Experience history and divinity all at one place when you walk into the architectural marvel that is Galta Ji Temple, built between the crevice of two hills with natural springs and seven sacred kunds (water tanks). Visitors are highly recommended to pay a visit to Galta Ji, especially people interested in ancient history.

2. Vidyadhar Bagh: Located at a stone’s throw away from the Sisodia Rani Ka Bagh, the Vidyadhar Garden was built to pay tribute to the man who designed Jaipur, the first ever planned city of India - Vidyadhar Bhattacharya. Enjoy a peaceful afternoon away from the bustling city for free with the local delicacies from the snack corners lined outside the park.

3. City palace: Know where the royals live, because the palace still continues to be the home to the royal family of Jaipur. The whopping entry fee to the city palace is all worth spending when one gets to see the intricacies of the designs and the resplendent interiors, the courtyards and the Sawai Man Singh II Museum. This place is right fit for a history enthusiast.

4. Jantar Mantar: When the king is a mathematics and astronomy enthusiast, the city has to get infrastructure worthy to be listed under UNESCO World Heritage sites. Built by the founder of Jaipur, Maharaja Sawai Jai Singh II, the Jantar Mantar of Jaipur houses the world’s largest sundial. A visit here can be coupled with a visit to the City Palace.

5. Hawa Mahal: The name of the pink sandstone palace literally translates to ‘Palace of Winds’. Walk up to the top of the palace through the circular staircase and feel that wind on your face and enjoy the view of the city down through the tiny little colourful windows.

6. Johari Bazar: If anyone is a sucker for artificial jewellery and other traditional artefacts, and got the bargaining gene, live your wish of ‘shop till you drop’ at the Johari Bazar.

As Jaipur city is well connected via all means of transport, the Sisodia Rani Ka Bagh is accessible quite easily from all parts of the city. One may rent cabs (Ola, Uber, etc.) or hire taxis, auto rickshaws and e-rickshaws to reach the garden.

The local state buses also can be used to reach here at reasonable price. This option is best for people traveling on budget.

For a comfortable and hassle free ride while visiting the tourist places of Jaipur, you can also opt for a cab from top car rental companies in Jaipur.

Jaipur Tourism, a division of Holidays DNA offers Jaipur Tour Packages for a relaxed holiday experience to the pink city in the best possible manner. You can choose the package that is best suited to you and embark on a beautiful journey to the historical city. Please fill the Contact Us form for more details on the various packages.