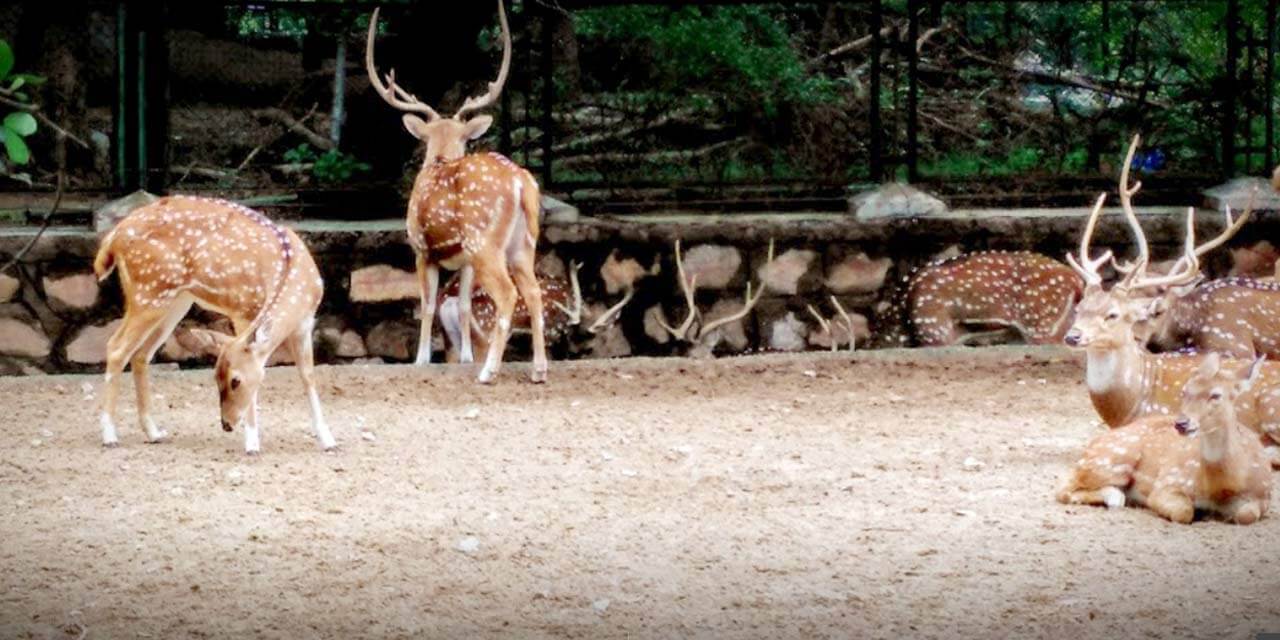 As the name suggests, the Jaipur Zoo is located in Jaipur, the capital city of the Indian State of Rajasthan and is spread across a total area of 35 acres. The zoological garden is home to the richest fauna of Rajasthan and boasts to be the largest zoo as well as one of the finest sanctuaries in the state. The zoological garden is also the fourth largest gharial (an endangered crocodile species) breeding farm of the country.

The zoological garden was built with the intention to preserve and conserve the wildlife that included mammals, birds and reptiles. Based on the animal families that dwell within the zoological garden, the garden is divided into two parts, one for mammals and the second for reptiles and birds.

Established under the Wild Life Protection Act, the Jaipur Zoological Garden authority works towards wildlife conservation efforts which includes various breeding programs carried from time to time for crocodiles, cheetal and gharials. Currently, the only ongoing breeding program is the gharial breeding.

As of 2018, the government has decided to build aviaries here. The zoological garden is run by the Rajasthan State Government.

The zoological garden is one of the famous spots for day picnic trips for schools wherein the kids get to learn and have a play day at the same time. The garden is also a hit among research students interested in botanical or zoological studies as they can study animal behaviour or carry on with plant based studies here.

The Zoological Garden was opened to the public in 1877. It is among the oldest zoos of India and it cost around 4 lakhs to establish completely.

The Gharial breeding centre of Jaipur Zoological Garden was established in the year 1999 and is the fourth largest breeding centre in the country of its kind. Gharial is an endangered species of crocodile family.

The Fauna at Jaipur Zoological Garden

There are around 71 species of mammals, birds and reptiles that are housed at the Jaipur Zoological Garden.

Mammals: As common as it can get, the Jaipur zoological garden is also filled with various species of deer, right from spotted deer to barking deer and Hog to Sambar. Additionally, the zoological garden is home to carnivores, omnivores as well as herbivores altogether. The carnivores include lions, tigers, leopards, foxes, jackals, hyenas, foxes, black panthers, wolves and Indian civets. Apart from the deer, the herbivore population of the zoological garden consists of black bucks, chinkara, Indian porcupine and rabbits. The omnivores include monkeys, baboons, black bears, Himalayan bears and wild boars.

Reptiles: Apart from the gharials, the Jaipur zoological garden houses several other reptiles in a separate chamber including crocodiles, turtles, tortoises, Indian pythons and one Eunectes notaeus (Yellow Anaconda).

The entry fees for Indian nationals is INR 15, and for foreign nationals the fee is INR 150.

The best time to explore the Jaipur zoological garden to the fullest can be best done during the winter months, between October to March, when the weather is relatively pleasant.

Places to visit near Jaipur Zoo

1. Ram Niwas Garden: The best part about the location of Jaipur zoological garden is its location within the premises of Ram Niwas Garden which makes it easier for the visitor to explore the beautiful landscaped gardens at leisure and spend quality time too.

2. Albert Hall Museum: Built in an architectural blend of English and North Indian elements of architecture, the Albert Hall Museum is located at a stone’s throw distance from the Jaipur Zoological Garden. Being the oldest museum in the entire Rajasthan, the visit to this museum becomes must as it houses a rich collection of Rajasthani as well as colonial history.

3. Bapu Bazar: No visit to Rajasthan is complete without shopping for traditional Rajasthani souvenirs, shoes and garments and one can buy all these at steal prices at Bapu bazar. If you are a shopping enthusiast and are a master of great bargaining skills, Bapu bazar in Jaipur is the right place for you.

4. Birla Mandir: Also known as the Laxmi Narayan Temple, the white marble temple stands tall with the Aravalli hills as its backdrop. Even if someone is not very religious, visit the temple for its intricate marble carvings on the pillars and walls.

5. City Palace: The seat of the erstwhile Kachwaha dynasty and present residence of the Jaipur Royal Family, City Palace is a must visit to have a first-hand experience of how the royals live. Book a guided royal tour and come back with the knowledge of the rich history of one of the prominent ruling houses of North India.

The Jaipur Zoo or the Zoological Garden, as it is commonly called, is located inside the premises of the Ram Niwas Garden, another prominent landmark of the pink city on the Museum Road.

How to Reach Jaipur Zoo

Since the Zoo is located inside the Ram Niwas gardens, a prime location of Jaipur city, reaching here is not a hassle at all. Jaipur being connected very well through all means of transport, visitors may hire a cab from top car rental companies in Jaipur to reach the Jaipur Zoo.

Auto-rickshaws and state run buses also are very good as well as economic options for people traveling on budget.

If you wish to explore the various popular tourist attractions of Jaipur, then book a Jaipur tour package with us. Jaipur Tourism, a division of Holidays DNA offers these packages at affordable prices to facilitate a hassle-free vacation to the pink city. To get more information about our packages, you can reach us by filling the Contact Us form.