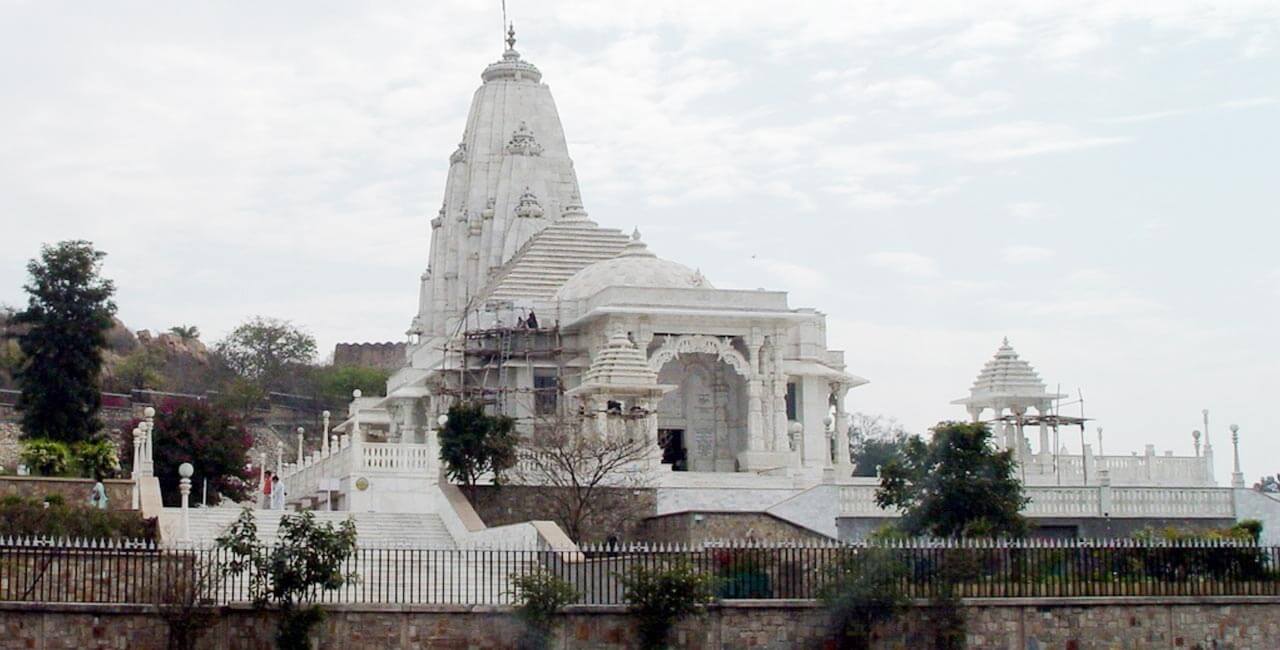 Most tourists love to visit the famous temples of any city they are visiting and tourists travelling to Jaipur make it a point to visit the Birla Mandir. A symbol of tranquility in pristine white, Birla Mandir stands majestically with the backdrop of a hilly landscape.

Birla temple is a landmark for the city and sees a large number of tourists and devotees every day. It is also known as the Laxmi Narayan temple and is the sanctum sanctorum of Lord Vishnu and Goddess Lakshmi.

It was built by one of the famous business families of India, the Birla family, who were given this land by the Maharaja of Jaipur for a token sum of one rupee. The B.M Birla Foundation built the temple on this land in 1988.

Built with white marble, the architecture of this temple reflects a modern style with traces of the traditional features you would find in a temple. The walls and the pillars of this temple are adorned with intricate carvings depicting quotes from scriptures, mythological events, and symbols, figurines of gods and goddesses and Hindu symbols.

The temple celebrates the cultural and religious diversity of India so you will find figures of several saints from other religions, historians, and philosophers existing side by side with those from the Hindu religion. The teachings of Buddha, the work of legendary teachers like Socrates and Confucius are a great sight to look at. The temple is a mélange of all the philosophies and religious teachings passed down to mankind since ages.

Three domes in the temple which represent the different religions in India stand out prominently in the structure of this temple. These domes are also a symbol of secularism prevalent in India. The entrance to the temple is adorned by an image of Lord Ganesha, who is worshipped foremost in all Hindu religious festivals and proceedings.

The white marble of the temple is inlaid with a golden color and it gives the façade a magnificent look. Outside the main temple structure, there are stained glass windows that have been beautifully adorned with Hindu mythology scenes. Just outside the main temple, there is another small temple with the idol of Lord Shiva in white marble and gold. People come here to pay homage and to admire its beauty.

Inside the main temple building of Birla Mandir, there are two exquisite standing idols of Lord Vishnu and Goddess Lakshmi, with the auspicious Hindu symbol Om on the wall at the back. These statues are a work of art and are adorned with gorgeous dresses and ornaments.

In front of the idols, a railing of marble has been made to keep the devotees at a distance and to create space for the priest to offer the prayers. There are painted stained glass windows on both sides which look breathtaking beautifully when sunlight passes through them.

The ceiling of the temple displays intricate craftsmanship and people often sit on the floor to observe its beauty. Doors to the temple are embellished with carvings in gold which look strikingly beautiful . The main entrance to the temple is flanked by marble pillars with splendid engravings and an arch with intricate jaali work design. There are two seating ledges on both sides of the entrance for visitors.

A broad walkway of white marble around the main temple is used by people to take a stroll after paying homage as it gives a full view of the lawns and the hills at the back of the temple. Since Birla Mandir is located at an elevation, you can see some parts of the city as well from here.

Things to see at the Birla Mandir

The sprawling temple premises have manicured lawns surrounding the main temple building. People who visit the temple at night make it a point to spend some time sitting on the stairs to admire the beauty of the temple and its surroundings.

At night, the temple looks ethereal with the moonlight reflecting off the white marble domes and casting a magical effect. Several dome lights are placed all around the temple and when they are lit up at night along with the insides of the temple, the glowing beauty can be witnessed from a distance.

There are several guides available here who can take you for a guided tour of the temple. These guides are fluent in the local dialect as well as several other languages. The time taken for a tour of the entire temple is generally an hour but most people end up spending much more time here because of the beauty of the temple and its lawns.

The ground floor of the temple has several shops that sell idols of gods and goddesses and local handicrafts. There is also a museum at the campus that showcases ancestral artifacts belonging to the founder Birla family.

Another iconic and equally famous temple of Jaipur, Moti Doongri is situated at a walking distance from Birla Mandir. People coming to any of these temples make it a point to visit the other one as well. Located right under the Moti Doongri temple are several sweet shops from where you can buy the sweets of your choice to be offered at the Birla Mandir for paying homage to the Gods.

You can also visit the Hanuman temple and Durga temple next to the Moti Doongri temple. Evening and morning aartis are something that must not be missed if you are planning to visit the temple. The soulful and melodious rendition of the aarti will transport you to a state of Zen and you will feel the connection of your soul with the Almighty.

Early morning and evening hours are also the perfect time to sit on the steps of the temple and enjoy the cool breeze.

There is no entry fee for the temple.

The best time to visit Jaipur is from September to March when the weather is quite pleasant and you can relish visiting the temple during the daytime as well. The festival of Janmashtami is celebrated with gusto at the temple and if you are in the city at that time, you must visit the temple to see the decorations.

How to reach Birla Mandir

The temple is located centrally and is easily accessible by various modes of transport like bus, auto, and rickshaws. Jaipur airport is well connected to all the major cities in India and abroad. The train connectivity to the city is also excellent and the station is at a distance of 5km from the temple. There is ample parking space outside the temple so it is very easy to park your vehicle on your visit to the temple. Top car rental companies in Jaipur also provide hassle-free rental service to the tourists visiting the city.

Jaipur Tourism, a division of Holidays DNA helps in planning your perfect vacation to Jaipur with its all-inclusive Jaipur tour packages. You can explore all the famous sightseeing places of Jaipur in the comfort of a private cab, that too without burning a hole in your pocket. Fill the Contact Us form to reach us and know further.