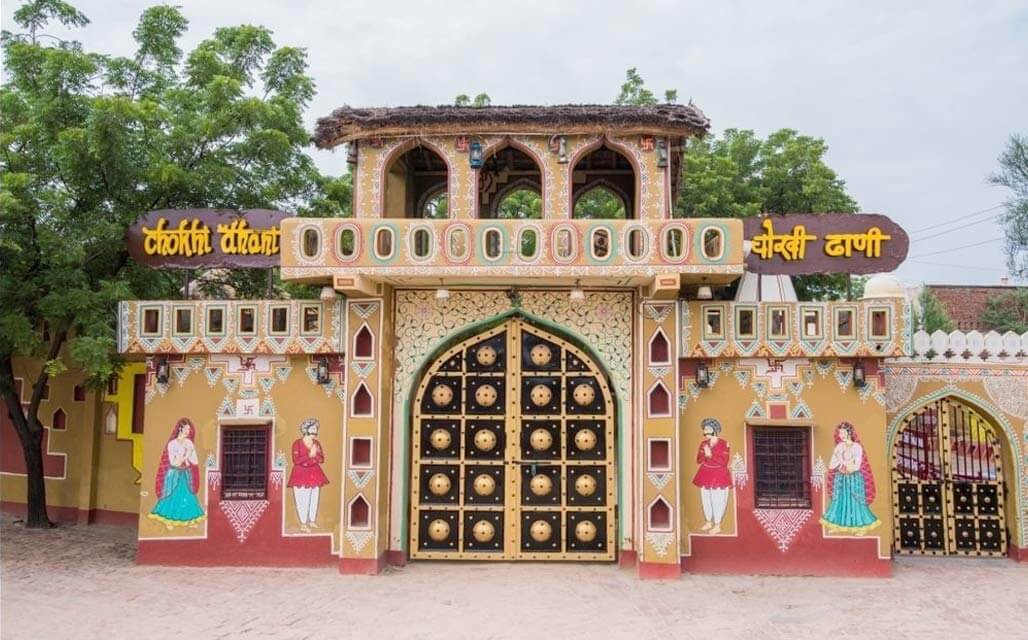 Around 20 kilometres from the main city of Jaipur, there is a mock village called ‘Chokhi Dhani’, which is a perfect mirror to the Rajasthani culture, food, traditions and heritage. The name Chokhi Dhani literally translates to Rajasthani Culture.

Specially designed to attract and introduce tourists to the authentic Rajasthani culture and heritage, the village was set up in 1989 over an area spanning 10 acres. Soon after, by 1994, Chokhi Dhani gained its own share of fame among the tourists across the world.

Since it displays the vibrant culture, art, folklore and tradition of Rajasthan, visitors can experience the countryside life and learn about the history of the Rajput valour.

Chokhi Dhani village is situated on the Ajmer- Jaipur highway, towards the Jaipur end. The village is located away from the hustle of the city and imparts peace and serenity to the travellers.

Attractions and Activities to do at Chokhi Dhani Jaipur

1. Haldighati Battle – Reliving the glorious Rajput past: The famous battle of Haldighati which was fought between the Mewars of Kumbhalgarh, led by Maharana Pratap and the Mughals, led by Maharaja Man Singh I of Amer is enacted by artists here at Chokhi Dhani. The performance of the fierce battle where the Rajputs emerged to be victorious takes the audience on a nostalgic and emotional ride.

The play or enactment of the Haldighati Battle is the most prominent activity at Chokhi Dhani and should not be missed by any means.

2. Rath Khana: The Rath Khana displays the chariots used by Rajput Royalty since ancient times. All chariots used throughout Rajasthan across all royal houses counts for a unique experience for the visitors.

3. Temples at Chokhi Dhani: There is a replica of Vaishno Devi Temple in Chokhi Dhani along with an artificial waterfall made. Other temples to look out for here are, Balaji Temple, Jungle Devta Temple, Ganesh Temple and Tejaji Temple. The diversity of the temples gives a glimpse of beliefs from diverse folks of Rajasthan.

4. Animal and Cart Rides: Camel, Elephant and Horseback rides are common and apart from animal rides, tourists can also pick from bullock cart rides and boat rides if they do not wish to go for animal rides.

5. Shows and Performances: Chokhi Dhani is famous for the music and dance performances by locals. The most well- known of them is the performance by the nomad tribe showcasing Kalbeliya, Ghoomar and Chari dance forms. Apart from this, the Bamboo Acrobatics, Terah Thali Dance and the Traditional Fire Act showcase the daring acts done by various folk artists which leaves the audience intrigued, speechless and in awe of their heritage.

The other performances also include magic shows where the artists display their tricks inducing various visual illusions and hypnotisms and puppet shows wherein puppeteers narrate tales from the ancient times that are typical to Rajasthani culture.

There is an astrologer who sits with his cards spread out at one place; there are bioscope films that showcase the history of Rajasthan, mehandi and henna artists to color palms and many more country side experiences that one can explore.

6. Games: The most famous among the games section is ‘Bhool Bhulaiya’ which is a complicated maze, ‘Jungle Sair’ is a forest safari game through artificial forest and ‘Gufa Jharni’ is a trek game wherein the visitor treks through artificial cave made through artificial waterfalls. Apart from these, there are other common games like dart games, archery and shooting.

7. Shopping at Chokhi Dhani: Since Chokhi Dhani is set up to promote everything local, it also promotes local artisans by displaying their arts and artefacts such as handicrafts, home décor pieces, accessories and paintings. This social initiative has been taken up by Kalagram and the artefacts are not very expensive.

If someone is an admirer of authentic and local food cooked with fresh ingredients, Chokhi Dhani is the place where they should be to experience the gastronomic scene of Rajasthan. The set up and ambience of the entire village is such that one cannot just leave without experiencing regality. The offerings at Chokhi Dhani include typical authentic Rajasthani food along with multi-cuisine platters.

1. Sangri: An authentic Rajasthani cuisine only restaurant, the food of Sangri turns out to be the best among all local dining options. The food is served on a leaf platter that goes in line with the tradition of Manuhaar. The food is delectable and well prepared that would leave the guest full but yet wanting more.

2. Gorbandh: The impressive open air dining arrangements at Gorbandh gets more people coming to this restaurant where only authentic Rajasthani cuisine is served. The sundried snacks and the food cooked in fresh ghee not only tickle the olfactory senses and taste buds, but also add up to the temptation of over-eating. The Dal baati choorma and missi roti served at Gorbandh are to die for.

3. Chaupad Jeeman Ghar: A sit down restaurant where the seating arrangement is designed based on the old game named ‘Chaupad’ that used to be played in royal households. The modern version of the game is ‘Ludo’ where four straight paths lead to a central home. The food served in Chaupad Jeeman Ghar is the typical Rajasthani ‘Thali’. The guests are treated as royalty.

4. Kesar Kyari Barbeque: An outdoor restaurant with al fresco dining arrangements that include some delicious and palatable food. They offer both vegetarian as well as non-vegetarian options. Their barbeque offerings are some of their best delicacies with chefs constantly standing by the grills and serving to the demands of their guests.

5. Bindola Restaurant: This one is a multi-cuisine restaurant and has a twist in the restaurant’s ambiance. The restaurant is built in circular shape with intricate wooden carvings donning the ceiling along with roof lanterns and the walls of the restaurant are lined with Rajasthani Mandana paintings. The restaurant is not only known for its food but also equally good when it comes to communicating about local heritage through art.

6. Aragosta Restaurant: Aragosta is also a multi-cuisine restaurant and is the largest restaurant and resort in Chokhi Dhani. The name Aragosta literally translates to ‘Please Eat’. Coming to the food, the food here is amazing and their menu includes cuisine ranging from North Indian to Chinese to continental and Italian.

7. Choupal: Choupal is also a multi-cuisine restaurant and an in-house eatery of the resort serving food in formats of buffet as well as a la carte. The name Choupal means ‘hub’ or a meeting place in a village where people gather for discussions over meals or snacks. The restaurant gives the perfect look and feel of a traditional choupal where guests sit, relax and enjoy the food.

8. Royal Fine Dining: The restaurant showcases rich ambiance and amazing hospitality. As the name of the restaurant suggests, dining here, in literal sense, is a royal experience as the food is served in silver plates. Guests get to choose their options from a vast menu. If one doesn’t mind spending leisurely, Royal Fine Dining is for them.

Entry for children below the age of 3 is free.

Best time to visit Chokhi Dhani Village Jaipur: Summers in Rajasthan are unbearably hot and humid which makes it difficult for the visitors to enjoy their visit. Hence, a visit to Chokhi Dhani during the winter months between mid- October to March is highly recommended.

How to Reach Chokhi Dhani Jaipur

Due to its location on the outskirts of the city at Ajmer- Jaipur highway, the best mode of transport to reach here is by road. There are a considerable number of transport options available, both comfortable and affordable. Hiring a private cab from top car rental companies in Jaipur is the best option to enjoy a comfortable and hassle free ride. Additionally, Chokhi Dhani also can arrange pick-ups and drops as they own their own fleet of cabs called Chokhi Dhani Rajputana Cab Services. The charges are INR 900 and INR 1500 for a round trip for a sedan and SUV respectively.

By Bus: If looking for economic options, one may get on to a Rajasthan Road Transport bus from any part of the city and reach Jaipur Bus Station which is situated at Jawahar Nagar Marg. From here, hire a cab or an auto rickshaw to reach Chokhi Dhani, which is 19.5 kilometres away.

By Train: Jaipur Junction Railway Station is the nearest railway station to Chokhi Dhani Jaipur, which is around 20 kilometres away. One may have to hire a cab or taxi from station to the destination.

By Air: Jaipur International Airport is the nearest airport to Chokhi Dhani, at a distance of around 12 kilometres. The best way to reach Chokhi Dhani from the airport will be by hiring a cab.

To make the most of your Jaipur tour, we at Jaipur Tourism, a division of Holidays DNA offer pocket friendly and customizable Jaipur Tour packages. Choose the package that suits you best and have a memorable holiday while exploring the popular tourist attractions of Jaipur. For more details on the various packages, please fill the Contact Us form.